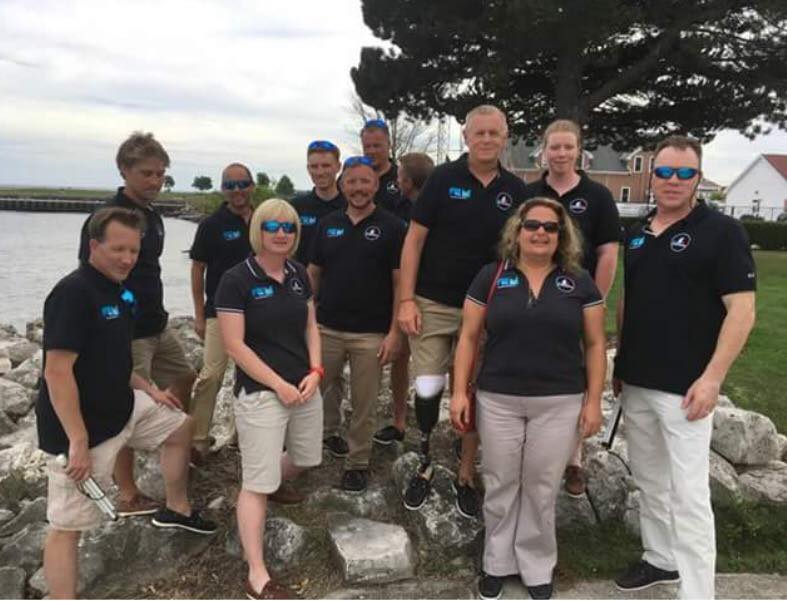 Sally Rodrigues who lives and works here in Lockleaze really put us on the map when she was part of the British team that won a gold medal in the Sailing World Championships.

Sally Rodrigues who lives and works here in Lockleaze really put us on the map when she was part of the British team that won a gold medal in the Sailing World Championships. What makes this story even more remarkable is the fact that Sally is blind and she was taking part in the blind world championships.

Every so often in life you come across someone who takes your breath away with their positivity. Sally is one of these people and is someone who has every reason to complain at her lot in life but her whole being exudes positivity.

Sally, who runs her own business Rodrigues Relaxation at the Cameron Centre, first became interested in sailing when she saw an advert placed by the RNIB asking for people to attend a taster session. Not content with a riding a tandem bike hundreds of miles a week Sally, a self-confessed adrenaline junkie, answered the advert and was soon on her way to East Anglia for the session. She fell in love with the sport instantly and says, “I enjoy the thrill, speed, and wind in my hair which sailing offers me. My first question when I start anything new is how fast will it go?”.

She dedicated one weekend per month to train in Windermere and the Isle of Wight and after eight years of training and competition Sally tasted success last year when she won gold at the National Blind Championships. Sally excitedly says, “I still haven't come down to earth from that day! I didn't imagine the journey could be this intense, exciting and enjoyable”.

International recognition wasn’t far away and in March of this year Sally was selected to represent Great Britain at the Italian Blind Match Racing competition. “I was so honoured to have been chosen”, Sally explains, “but it came as quite a blow to be informed the week before I flew to Italy that my helmsman had unfortunately contracted a viral meningitis. This meant we had to sadly withdraw from the competition”.

I remember being numb for a day. We were told we couldn't let anybody know, as not everybody had been selected yet. I was ready to burst! I could've ran to the highest point in Bristol and just screamed it with all my might! Alas, I contained myself.

“The World Championships were coming. Full of love and support for the sport, it was a once in a lifetime opportunity, I feel so lucky to have experienced racing the boats on Lake Michigan, let alone being selected to represent my country!

“I think each of the 17 members of the sailing squad choked back tears of joy when we walked into the opening ceremony to our national anthem! It's the stuff dreams are made of”.

The championships were held in Sheboygan which is on Lake Michigan. Sally came second overall in her class winning a silver medal, with the British team managing to secure two golds, two silvers and the Squadron Cup which, with a gold medal, is awarded to the overall winners.

When you ask Sally about her hopes for the future she is most definite, “Help me get blind sailing classed as a Paralympic sport”.

In Blind Sailing competition the yachts consist of two blind sailors and two sailors with normal vision. Sally’s job on board is to get the 50 foot sail up and down in a matter of seconds.

Professionally Sally is a complementary therapist and runs Rodrigues Relaxation in the Cameron Centre. She offers Holistic, Sports, Indian and Reflexology. Sally qualified in her five complementary therapy disciplines at the Royal National College for the Blind in Hereford. Due to her blindness she is able to offer body conscious clients a unique level of privacy, in a relaxing and friendly atmosphere. Her clients have included paralympians Anthony Kappe MBE who went on to gain gold in the tandem sprint at London 2012 and footballer Lee Brunton who also competed at the Games.

Treatments include a consultation of lifestyle, your chosen treatment and after care advice. Reflexology is available on hands as well as feet.